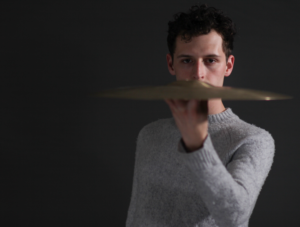 Aaron Gochberg is a percussionist and composer from the United States. His recent appearances include performances at festivals including South by Southwest, Underground Music Showcase, Madison New Musical Festival, Camaguey Jazz Festival, Nief-Norf Summer Festival, and the LunART Festival. He has performed in venues across the United States, including Carnegie Hall, Lincoln Hall, the Overture Center for the Arts, and abroad in China, Cuba, and Canada.

As a percussionist, Aaron has appeared with Sō Percussion, Cross//Hatch Percussion, Sound Out Loud, and the Tatsuya Nakatani Gong Orchestra. His percussion duo, Filament, won prizes at both the SCM International Artists Competition and the Great Plains International Marimba Competition, and they were recently featured on a new release by Ron Coulter, Toiling in Obscurity. As a composer, Aaron works often feature repetition, formal simplicity, and electroacoustic processing, emphasizing his conceptual interests in objecthood, memory, and auditory perception.

Aaron holds a B.M. in Percussion Performance from the University of Wisconsin (2018), where his primary teachers were Dr. Anthony Di Sanza, Dr. Todd Hammes, and Tom Ross.

Alicia Reyes (Extremadura, 1996) is a pianist and composer with 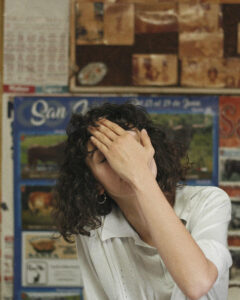 interests in analogue electronic music, free improvisation as a compositional tool and interdisciplinary artistic research projects. She holds a degree in Music (Piano Performance) from the Conservatoire of Badajoz and subsequently completed a postgraduate course in New Compositional Techniques at the Hochschule für Musik und Theater in Hamburg (Germany), a course directed by Alexander Schubert, Prof. H. Erdmann and Georj Haidu with a special focus on new narratives in contemporary music.

Her works have been performed at festivals such as ZKM/next_generation (Karlsruhe), at Blurred Edges and WE PRESENT (Hamburg), “The Toy Piano takes the stage” (Como), “Sommer in Stuttgart” Festival Neuer Musik or “neue musik in st.ruprecht” (Vienna).

She has written music for theatre, dance/performance pieces, installations and has worked with instruments in hybrid set-ups. She combines her career as a pianist, improviser and composer with various ensembles such as SOA (experimental pop) and KFELD KOLLEKTIV (analog techno and noise) as well as with other personal projects.

Her latest musical and multimedia works explore themes such as human self-perception on a physical and psychological level, time as a virtual space or the intimacy and emotional potential of social networks. 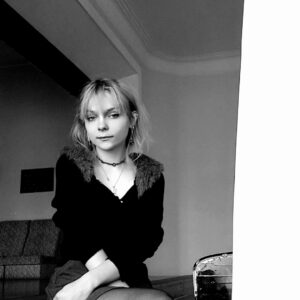 Helena Atkin is a British-Estonian composer and pianist from London. As someone with a lifelong love of literature, art, and music, Helena is passionate about composing, in the most holistic sense, sound, language, and visuals together as one. Having grown up in a multicultural and bilingual household, Helena has been imbued with a love of culture and language from an early age and has since developed a fascination for the ways in which a language’s phonology and linguistic properties manifest stylistically across the arts. As such, much of her work is centred around the reconfiguration of musical notation both as a linguistic script and as a genre of visual art.

In pursuit of interdisciplinarity, Helena regularly collaborates with fellow musicians as well as other creatives, ranging from poets to fashion designers. She is the founding member of ‘Koshki’, a London-based creative collective of young artists covering various disciplines, and has, more recently, begun working with ZZEG ZZAG collective.

In 2022, Helena graduated from The University of Manchester, where she studied composition under Dr Joshua Brown and piano under Duncan Glenday, and received her DipABRSM in Piano Performance in 2018. Helena has also been awarded Runner-Up in Cambridge University’s Queen’s College Estelle Prize for English, and has spoken at The Courtauld Institute as part of ISCA’s ARTiculation Competition.

Inga Stenøien is a guitarist, improviser, composer and multi-disciplinary artist from Trondheim, Norway. In the heart of her projects lies a deep curiosity for experimentation and creation of new sounds through different mediums, preparations and collaborative artistic work. She has a strong live expression, and creates music with a high focus on the sounds that emerge, resulting in fragile and intense soundscapes.

Stenøien graduated 2021 from the Norwegian Academy of Music in Oslo, with a Bachelor’s degree in Interpretation of Classical and Contemporary Music. Over the last years she has collaborated with various musicians and artists from the free improvisation scenes in Oslo. Her ongoing collaboration with contemporary dancer Marte Melhus has resulted in the performance «The sky is an abyss in which I look down into», based on a poem written by Stenøien. Stenøien has performed at venues such as the contemporary music seminar Performing Precarity in Oslo.

Stenøien is socially conscious, and uses her platform to raise her voice as a feminist. She creates performances based on social and political questions and amongst her projects is writing a book of short stories based on experiences with sexual harassment. She uses self-written poetry and movement as a way to approach, compose and improvise music. In her current practice she explores the differences between composition and improvisation, collaborative practice between different mediums and music as a performative component.

As a violinist, she has specialized in contemporary chamber music, experimentation and improvisation. She constantly collaborates on stage projects making original music, sound design, sound art and stage performance. She is a founding member of Colectiva Tsunami, a group of Mexican women musicians with a gender perspective who do activism, but also compose and perform their own music and other composers. She is a member of Ensamble Supercluster, a string quintet with which made the album “Música para trazar un mapa” and which contains works by young Mexican composers. She is a workshop facilitator for topics related to sound culture. She has participated as a violinist in festivals in Peru, Chile, Ecuador and Germany. She currently has a solo sound experimentation project that combines violin, voice and electronic media.

As an artist she is interested in exploring the concept of liminality for other ways of composing, performing and creating, through collaborative processes aware of their socio-historical environment and autobiographical aspects. 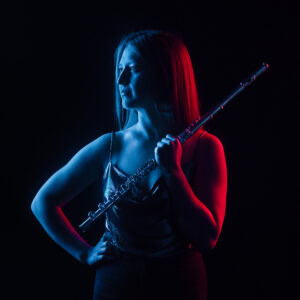 Marianne Sihvonen is a luminous Finnish flutist who is passionate about giving a voice to the works of living composers. She has premiered several new works by a new generation of composers and is continuously working with new ones. Marianne is also a dedicated environmentalist. As one half of the duo, HAV, with the Faroese guitarist Alvi Joensen she brings attention to various environmental issues in Nordic countries. In 2022 they will premiere seven works by seven Nordic composers and tour around Sweden, Denmark, Finland and Faroe Islands.

Marianne took her Master’s degree at the Malmö Academy of Music and continued her studies at the soloist programme (advanced postgraduate diploma) in the Royal Academy of Music in Aarhus. She has been fortunate to take part in numerous international masterclasses with teachers like Claire Chase, Emily Beynon, Christina Fassbender and Camilla Hoitenga and festivals like the Darmstadt Summer Course by Internationales Musikinstitut Darmstadt, Time of Music in Viitasaari and Malmö Chamber Music Festival. 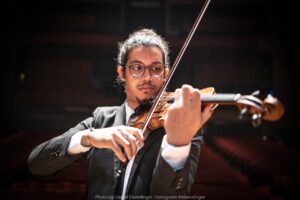 Brazilian contemporary composer and performer, Matheus Souza holds a bachelor’s degree in Music from Instituto Villa-Lobos -UNIRIO, where he received guidance on violin performance from Prof. Dr. Paulo Bosisio, and where he was a student in both the Contemporary Composition and the Multimedia Improvisation classes of the Prof. Dr. Arthur Kampela.

Matheus Souza was awarded with the second mention in the Nuestra América 2020 – a string quartet music composition competition, in Mexico -, and he had a piece selected in the PandeMúsica: contemporary music compositions and performances of one minute for clarinet and/or bass clarinet (Brazil). He develops his works interacting composition with music programming, visual arts, philosophy and sociology. The compositions of him (be they acoustic, electroacoustic, or mixed) have complex sound atmospheres aimed at experimenting with the new music.

M. Souza received commentaries about his music by great musicians such as J. Antunes, A. Kampela and O. Espinosa that it is well developed and well structured; it has rich sections with beautiful and coherent ideas; and it impresses by the technical finish. He worked collaboratively with composition professors of IVL revising new musical compositions for strings and performing on several world premieres for different instrumentations – with or without electroacoustic devices -, such as solo violin, trios, quartets, quintets, but also twelve hands piano. 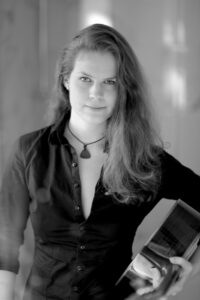 Viktória Šinkorová is a composer, classical guitarist, improviser and early researcher who collaborates extensively with other musicians, dancers and filmmakers. She obtained a first-class BA Degree in 2021 in Performance and Composition from Middlesex University, London (MDX); and she is the recipient of the University’s Turton Prize for outstanding academic achievement. Since 2019, she directed and performed with MDX’s free improvisation ensemble-in-residence, Scorched Earth. She now studies composition with John Buckley, and classical guitar and improvisation with Benjamin Dwyer.

In 2021, Viktória participated in the New Pathways in Improvisation@MDX performance-conference event (www.newpathwaysinimprovisationatmdx.com) giving a paper on what she calls interweaves – exploring the liminal spaces of notated and improvised music. Her composition, After Dowland – a work exemplifying her research was also premiered by Scorched Earth in that event. In July 2022, she took part in the Irish Composition Summer School guest directed by Ed Bennett and Ann-Marie O’Farrell.

Viktória’s research continues to focus on interweaves in the work of leading composer-improvisors Nick Roth, Benjamin Dwyer, Barry Guy, Jenn Kirby and Charlotte Hug, with whom she has conducted one-to-one interviews. She has performed free improvisation sessions with Dwyer, Hug, Roth and Olesya Zdorovetska.

In addition to her creative work, Viktória has been working as Production Assistant for Viva Musica! Festival (www.vivamusica.sk), which is the biggest summer festival of classical music in Slovakia; and she is also Head Administrator of New Pathways in Improvisation@MDX. 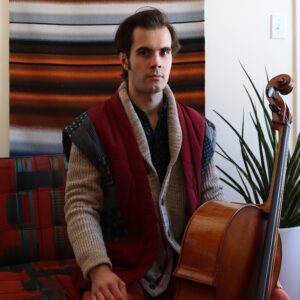 Wilson Tanner Smith is a Chicago-based cellist, composer, improviser, and performance artist originally from Philadelphia, USA, whose music is characterized by the use of limited materials and simple forms, and a fascination with the much that can be found through patient looks into the small and subtle. His theatrical-music work also often fixates on the nature of communication/communion: its means, impossibilities—and going on trying anyway.

As a cellist/improviser he frequently collaborates across Chicago’s music, theatre, and dance communities at venues such as Constellation, Elastic Arts, Experimental Sound Studio, and the Ragdale Foundation, with artists including dancer/choreographer Ayako Kato, the Kristina Isabelle Dance Company, Facility Theatre, and many established and up-and-coming improvising musicians in Chicago. He is a member of the improvising quartet Mad Myth Science, creating “spontaneous compositions and rituals for an increasingly unstable world.”

Smith has premiered music by Manfred Werder, Ben Zucker, and Carlo Diaz, and his compositions have been performed in the US and Portugal by Ensemble Linea, saxophonist Brandon Quarles of ~Nois, Stephanie Wagner and Raquel Lima, and flutists in collaboration with Claire Chase. His recent cross-disciplinary work can also be found under the name BIVOUAC.

He holds a B.M. in music composition with a minor in musicology from Northwestern University, where he studied with Jay Alan Yim, Juan Campoverde, and Lee Hyla.